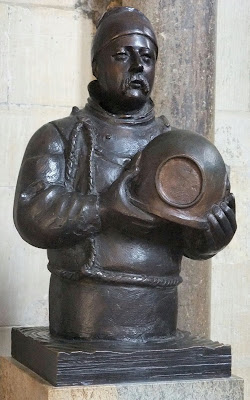 In the early 20th century Winchester Cathedral was in serious danger of collapsing. Its foundations had been built on a timber raft lying on a bed of peat and over the centuries compression of this peat had allowed the cathedral to sink and crack.

Trenches were built to start the underpinning process, but no sooner were they dug than they filled up with water due to the high water table under the cathedral. The solution was to send a diver down to underpin the sagging walls. It was a huge task and a diver William Walker was chosen for the job. Alone he went down into the dark, cold waters beneath the cathedral almost daily for 6 years from 1906-1912 eventually placing 25800 bags of concrete, 114900 concrete blocks and 900000 bricks to shore up the walls.
William Walker was awarded the MVO (Member of the Royal Victorian Order) by King George V who said that he had "saved the cathedral with his own two hands".
Unfortunately William died of Spanish flu a few years later. In the cathedral is this small statue of him in his diving suit. He also has a pub named after him just round the corner from the cathedral.
Posted by Amanda at 08:15